On November 27th, six new memorial stones -'stumbling blocks' - were laid in Rexingen and two in Mühringen. The artist Gunther Demnig from Cologne (founder of this project) came to Horb for the fourth time to lay the stones personally. He reported that there are now over 49,000 such memorial stones throughout Europe. In Germany alone the project includes around 1,000 sites to date, in major cities as in small villages.

This project has had an incredibly widespread influence. Innumerable citizens both old and young are doing research in their localities on the fate of those murdered by the Nazis. They seek out descendants, write biographies and organize memorial ceremonies. It often happens that the current owners of the houses in front of which the stones are laid learn for the first time something of the history of their locality before and after the Nazi regime. In the meantime many initiatives in this project have linked up, exchanging research results and material from archives, tracing those who lived in these various places. 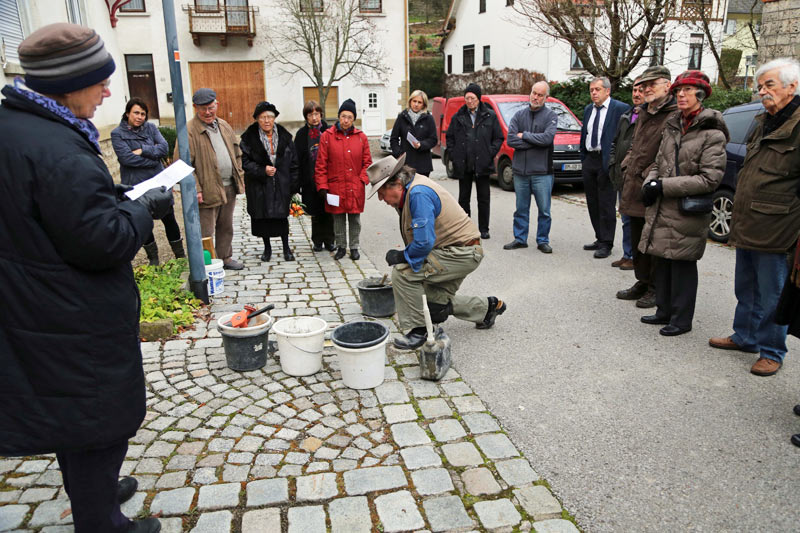 In Mühringen two stones in memory of Jewish citizens were laid in front of neighbouring houses in Graf-Gerold-Street, one for Martha Schwarz and one for Karl Steinharter. In Rexingen two stones were laid for the couple Arnold and Friederike Isenberg, another for the widow Elsa Pressburger and three for the family Wilhelm, Zilly and Ilse Wälder. All were members of the Jewish community in Rexingen. You can find their biographies in the Biographical Records of this website.