Valuable discovery in the archives of Shavei Zion

Barbara Staudacher and Heinz Hoegerle visited Shavei Zion in April. Together with Karl-Hermann Blickle and his wife Lisbeth they talked to friends in Israel about the possibility of building a museum in the centre of Shavei Zion. It should serve as a meeting place for young and old families.
Judy Temime, who is in charge of the archives of Shavei Zion, rearranged them considerably in recent months. They are now more easily accessible and new treasures have come to light, including a postcard discovered among the possessions left by Sev (Wolf) Berlinger.

Sev Berlinger was a teacher in Rexingen from 1933 to 1934. In April 1938 he was among the first emigrants from Wuerttemberg to develop the settlement in Shavei Zion. He and his wife Margalit were the first teachers in the settlement and they remained closely attached to the community until they died.
In September 1937, three “scouts” were sent from Rexingen to the British Mandate of  Palestine to select land on which to build the proposed settlement. Alfred Pressburger, Julius Froelich and Fredy Weil travelled from Trieste on board The Galilea, the ship which took most of the refugees from Rexingen to Palestine.
On September 26th, 1937 Alfred Pressburger, on board The Galilea, wrote a postcard to the Berlingers who at that time were in charge of the Bomsdorf Estate near Graefchenhainichen in the county of Bitterfeld. Here young people wishing to flee to Palestine were trained in farming.

On the front of the postcard we see the ship The Galilea. This is the first photo of The Galilea to come into the possession of the Rexingen Synagogue Association. 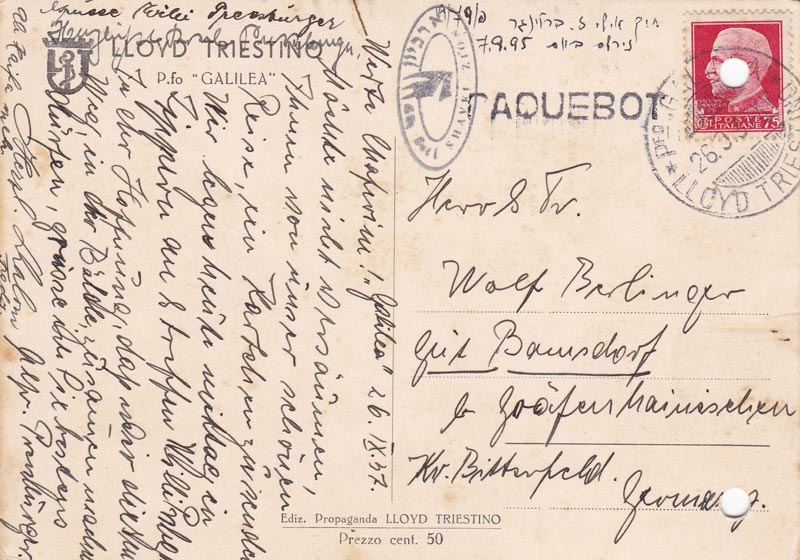 The reverse side of the card reads as follows:

Galilea  26. IX. 37
Dear Friends, Don’t want to miss sending you a card from our lovely trip. At midday today we’ll dock at Cyprus where we’ll meet Willi Pressburger. Hoping we can soon go this way together,
Best wishes, Alfred Pressburger